a kick in the i

Because it’s always there, much of what I write starts life in the ‘Notes’ app on my phone.  Most of those notes remain just that. Often I go back and think ‘I’ve no idea what I was even thinking when I wrote that.’ For example, I have a note from 12th October that simply reads ‘self portrait reflected in a window’. I’ve no idea what triggered that, or whether I intended it as a poem idea, a potential title or what, but I’ll leave it there, and maybe it will come in handy one day.﻿

Sometimes I fire up the app and know that what I’m writing is intended as ‘poetry’ even if it doesn’t end up being a poem. The poem that I’ve worked on most recently, and have chosen for no better reason than that, to be ‘workshopped’ in my MA poetry group started life this way. 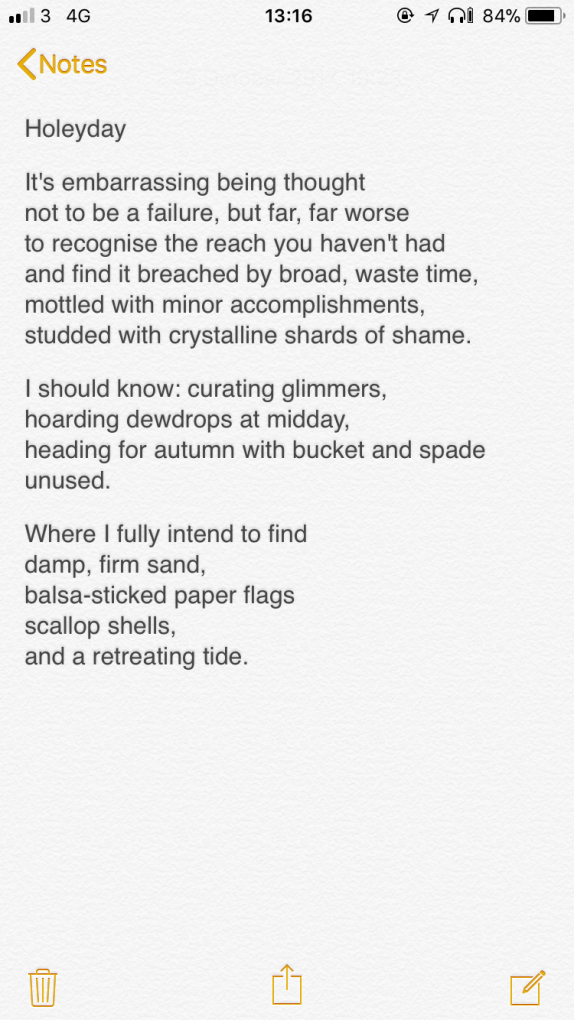 I’m not sure why the line ‘to recognise the reach you haven’t had’ felt like one that felt as though its form had a gravitational pull that determined the shape of the poem as a whole, but it did, even though it didn’t survive in its original form. Perhaps it’s as simple as the fact that we had been focussing on form in the seminar, and so iambic pentameter nosed itself ahead (as it so often does), panting rhythmically in my mind’s ear. When I’m working with full attention on a poem, I usually turn to the physicality of pen or pencil on paper. (I think I may already have mentioned that.) Like this:

Then, I typed it up, and changes, or possible alternatives suggested themselves, and were tried out, during that process. Some people say a poem is never finished. I know what they mean. Here is where mine has settled, for now:

One thought on “Form”